Here are some tips to keep these beetles from defoliating your trees, shrubs, flowers and garden. 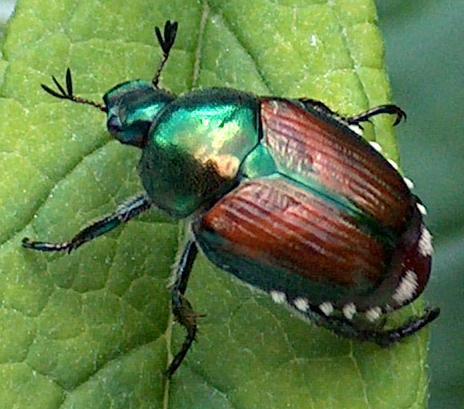 Every summer, questions pour in to us regarding the Japanese Beetles that are voraciously devouring people’s flowers and plants. It’s quite obvious these little buggers are the culprit. Their ¼” long bodies are easy to spot and since they are very slow moving, you’ll likely catch them in the act. Their shiny metallic green and copper shells glisten in the sun like rare jewels but beauty can be deceiving! They don’t seem to care a bit that they are destroying our favorite roses, hibiscus and clematis flowers, just to name a few of their favorite flowers.

Japanese Beetles are a major summer pest throughout the Central, Midwestern and Northeastern United States and Canada. They live as grubs in your soil from fall through winter, then emerge as beetles between Mid June to late August. Your local extension agent will have more specific information for the timing of Japanese Beetles in your area. Once they emerge as beetles, they chew large holes in flowers and foliage to the point where they will even eat every last leaf off of the plants they love. Members of the Rose family are their favorite targets.

Before Japanese Beetles emerge, they are grubs that live under your lawn and in your garden beds. So prevention means getting to the grubs before they can grow up into beetles and spread all over your garden. There are lots of options for controlling grubs. The following can be purchased at garden centers or online.

This method is not for the squeamish! Most people don’t want to touch bugs, but Japanese Beetles do not bite although they do pinch so a fast hand is needed to pick them off plants and either bag them or drop them into a bucket of soapy water to get rid of them. It is easiest to do this early in the morning before the beetles wake up and start moving. 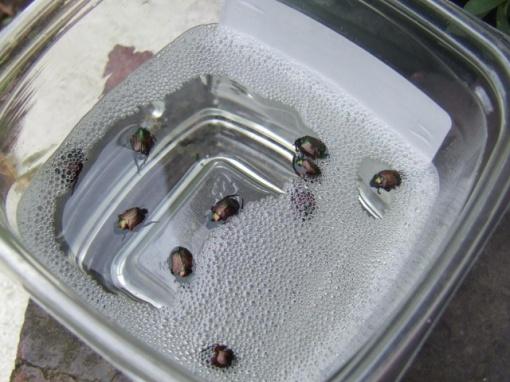 We offer traps you can buy which are made especially for Japanese Beetles. The way they work is by luring the pests into a small container from which they cannot escape. This can work to help reduce the beetle population. as it will attract all the local bugs to your garden and that can be a LOT of beetles. Since the beetles may feed on 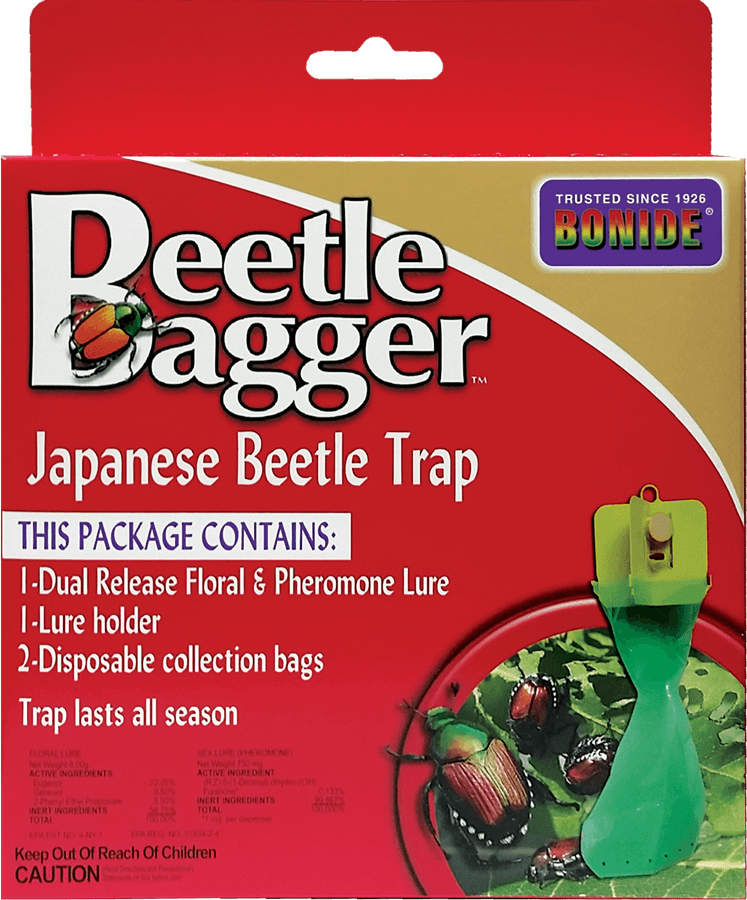 plants before entering the trap, do not set the trap out near your favorite plant. Instead, place the trap at the edge of your yard away from the plants the beetles may damage. Make it a neighborhood effort as traps become more effective if there are many scattered throughout the area.

Safe Chemicals: Select chemicals can be effective at controlling Japanese Beetles. Least toxic to humans and pets are the Pyrethrin class of insecticides which are safe to use on vegetables, grapes, raspberries, flowers, roses, trees and shrubs but can be very bad for fish, so avoid using them around ponds. Another low toxicity control method is applying Neem Oil as a spray as soon as the beetles appear in your garden. Neem Oil can help control Japanese Beetles, Cucumber Beetles, Flea Beetles, Cabbageworms, and Colorado Potato Beetles.

Carbaryl, Imidacloprid and cyfluthrin are very effective and quick in managing the adult stage of Japanese beetle; however, both pest-control materials have broad-spectrum activity or kill many types of insects and mites. Some of these sprays like Imidaclorprid can kill insects and protect your plants for up to 30 days.

Japanese Beetles seem to try a taste of just about everything in the garden, but there are actually a select group of woody and herbaceous plants that they typically leave alone. Consider this list when adding new plants to your garden if you are plagued by Japanese Beetles.